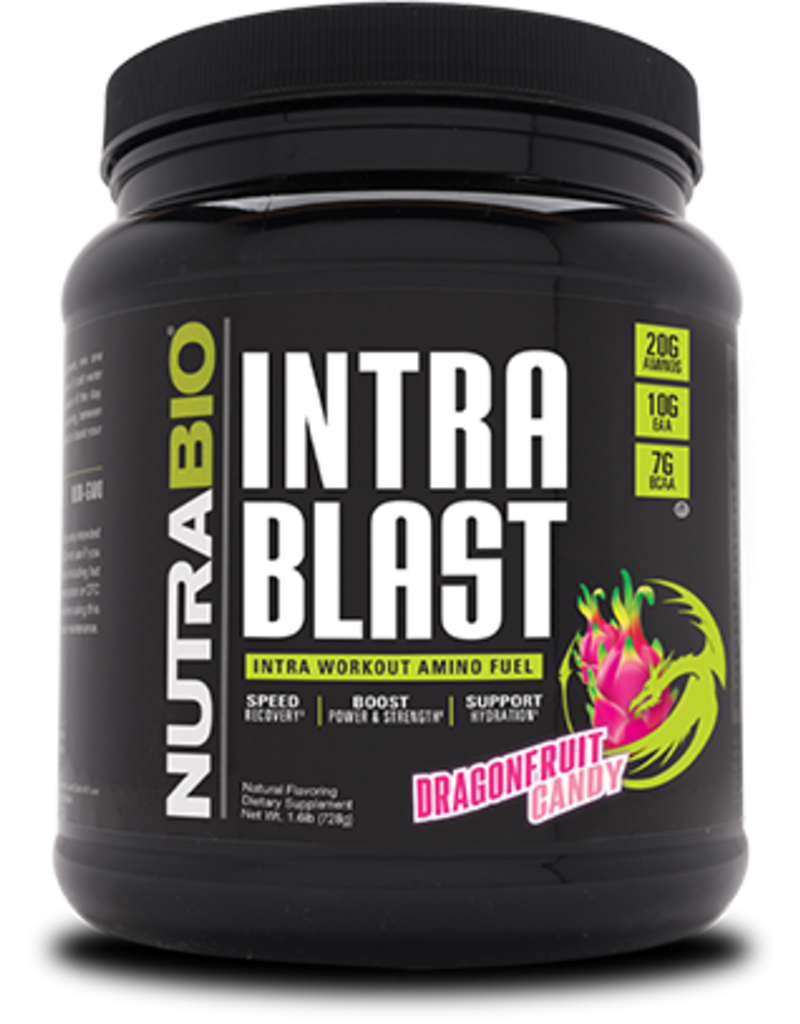 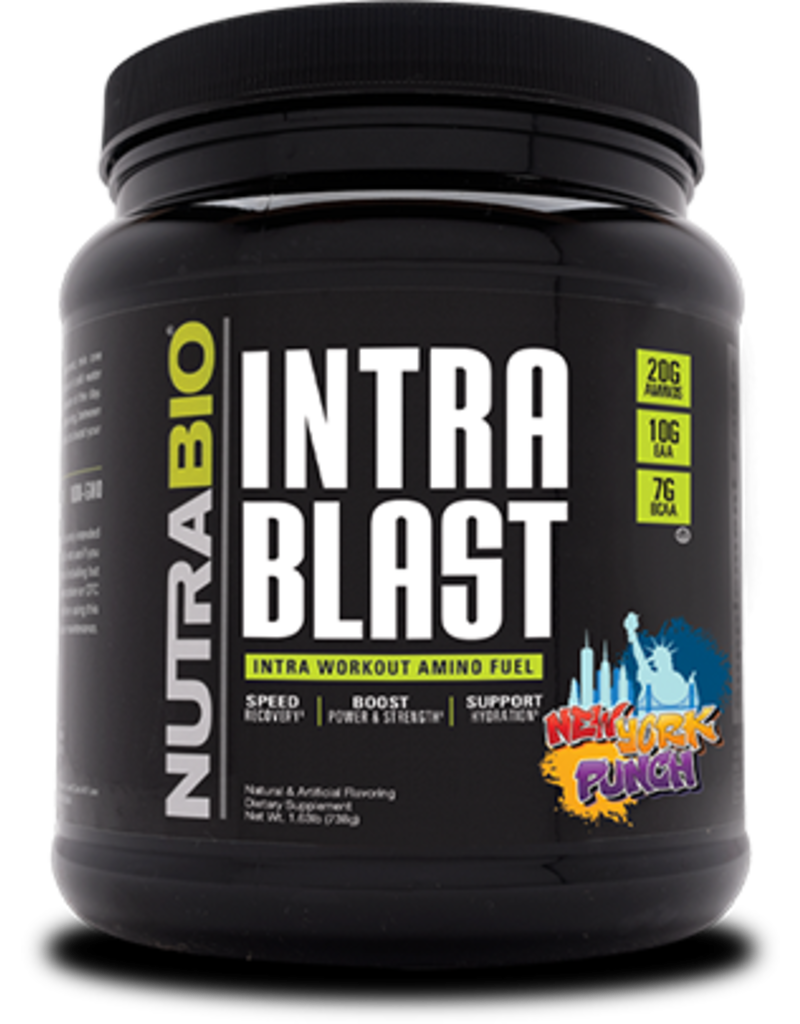 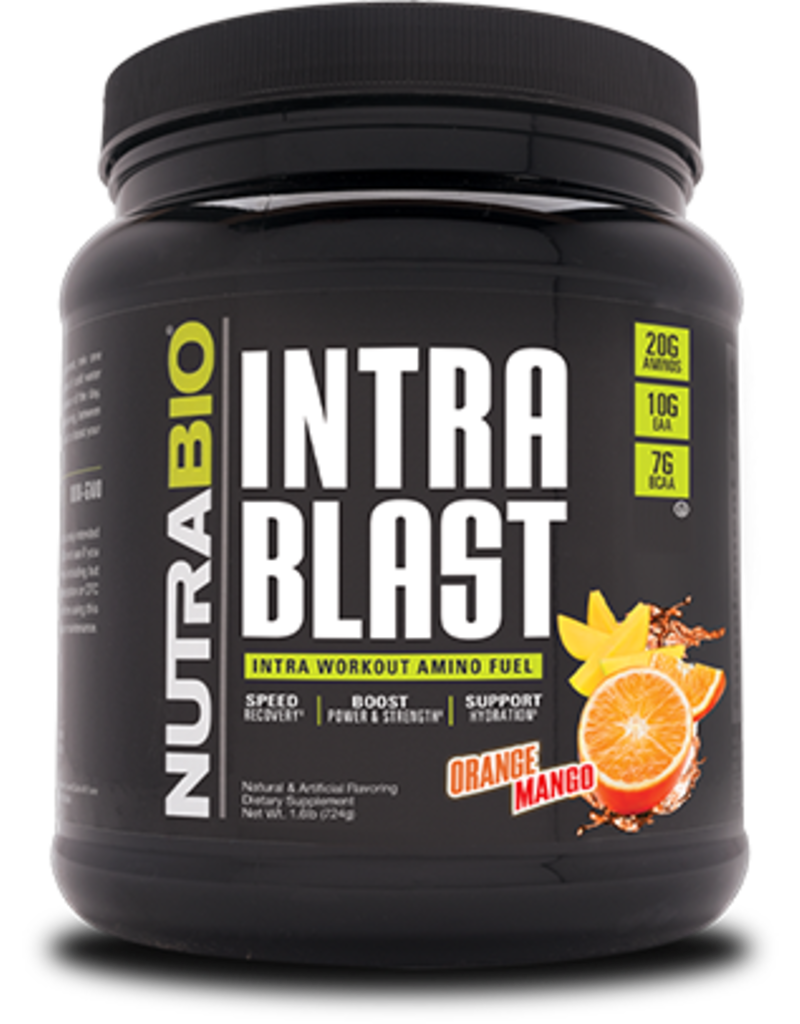 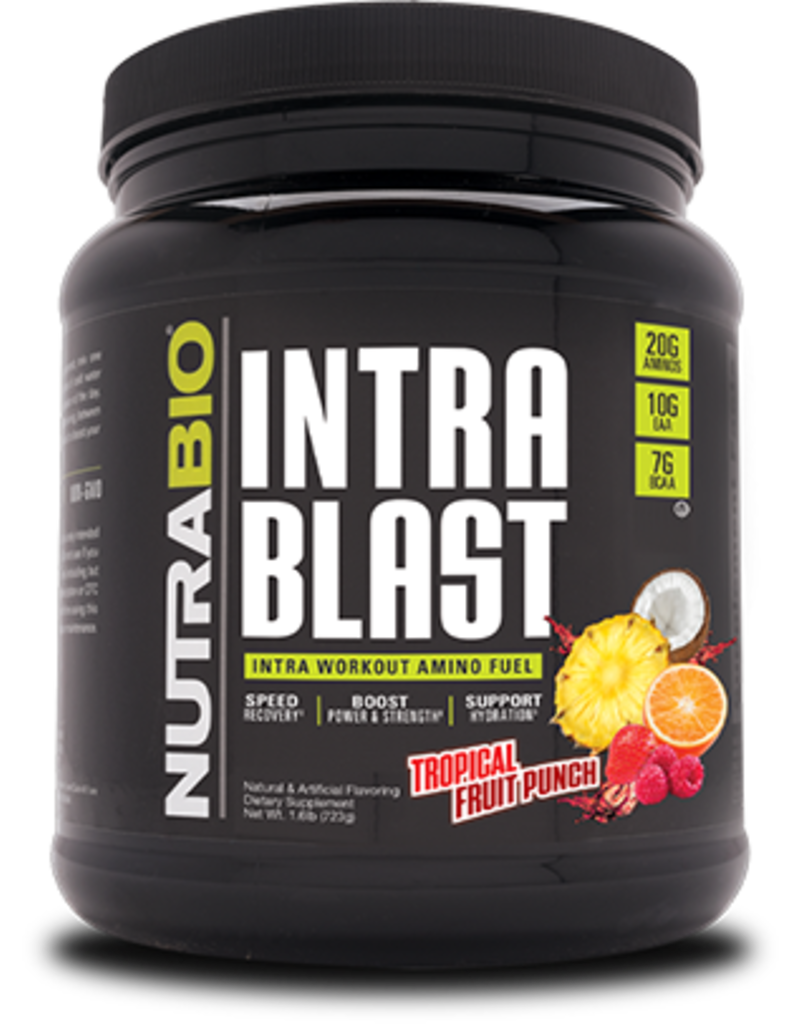 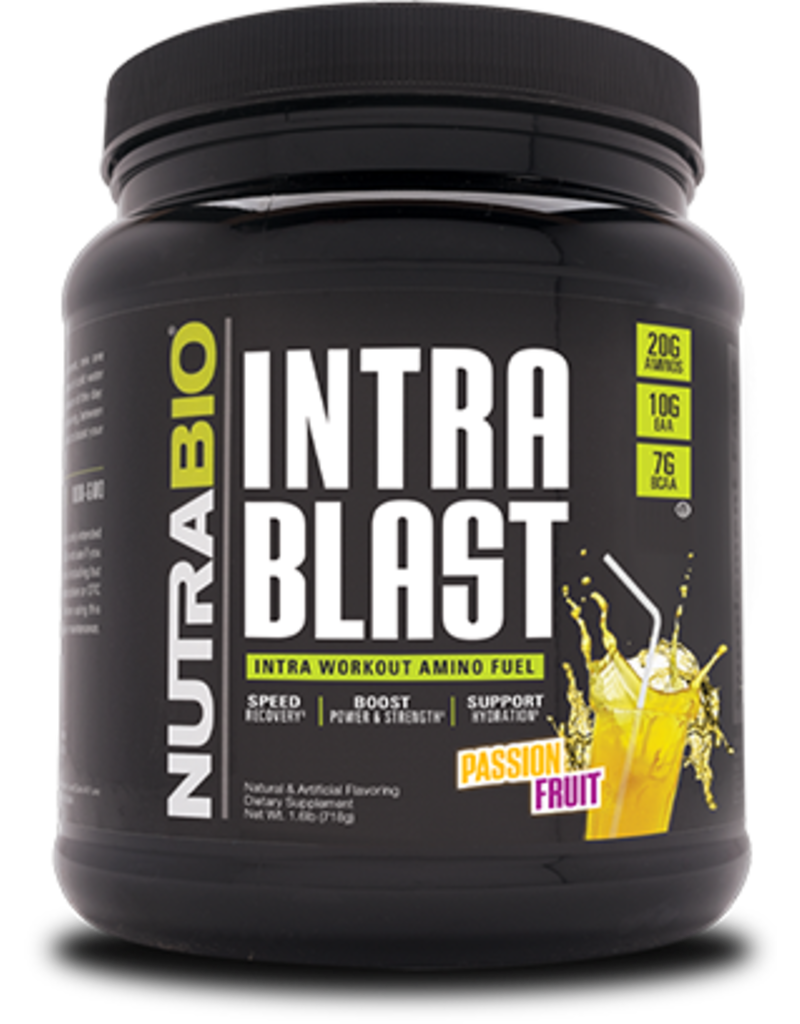 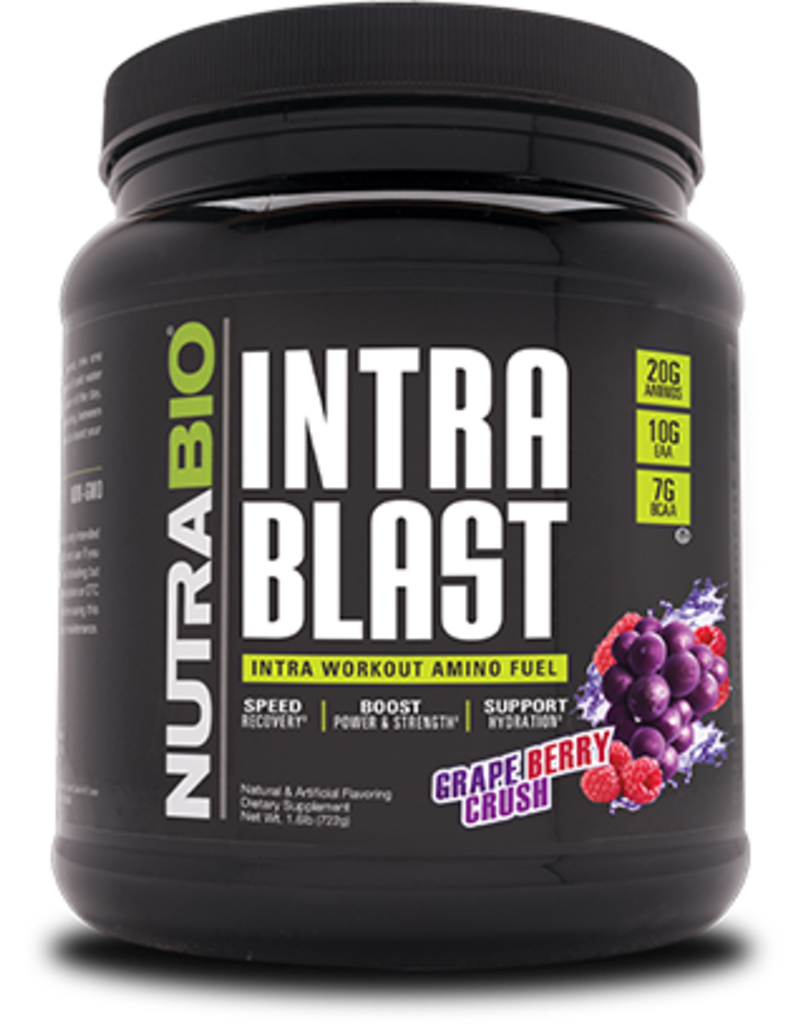 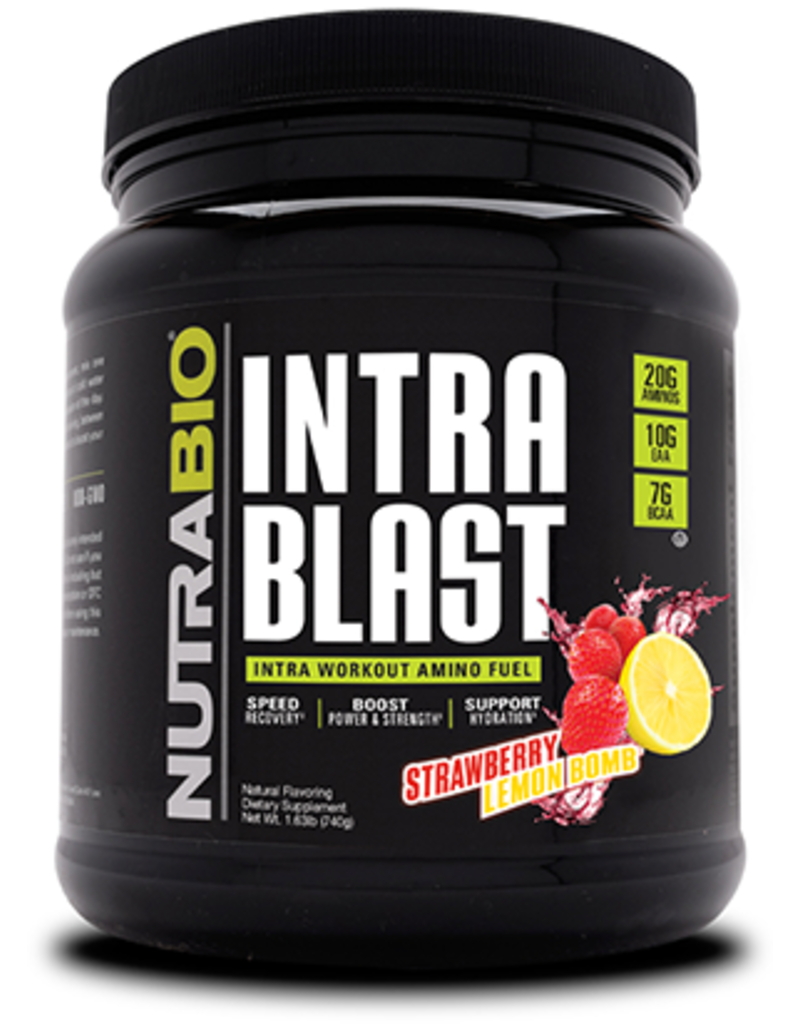 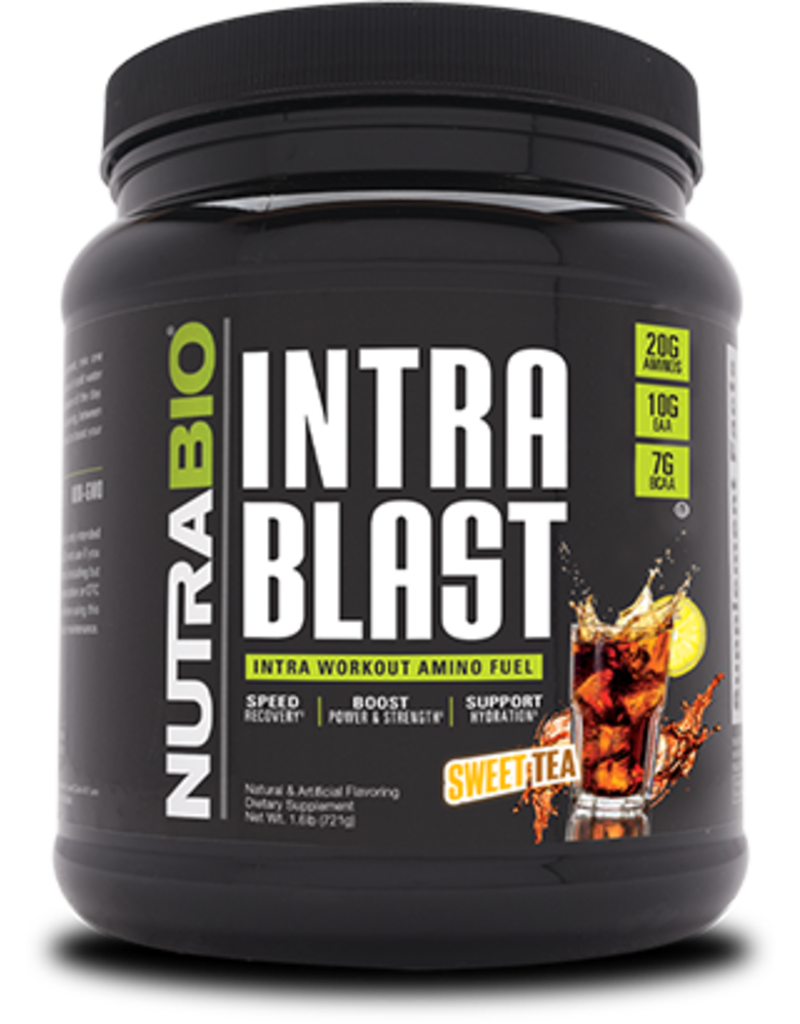 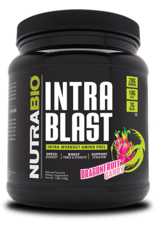 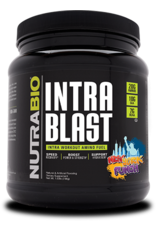 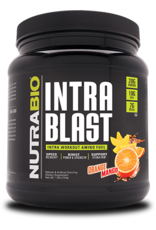 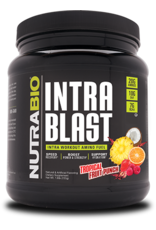 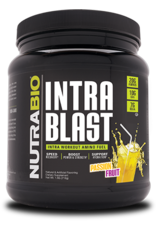 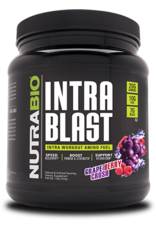 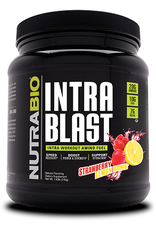 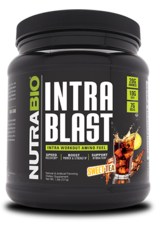 HOW DOES IT WORK?

GAME OVER. INTRA BLAST DOMINATES ALL OTHER INTRA WORKOUTS.

NutraBio Intra Blast is an essential amino acid (EAA) powerhouse that was developed to address the time between pre- and post-workout, commonly referred to as the intra-workout period, when critical nutrients are needed to fuel performance, blunt fatigue, and accelerate recovery. Unlike other intra workouts that contain only branched chain amino acids (BCAAs), Intra Blast contains over 10,000 mg of all 9 essential amino acids, including BCAAs, clinically dosed to work synergistically in order to stimulate muscle protein synthesis, promote muscle growth, enhance recovery, and decrease muscle soreness from the most intense training sessions. NutraBio took Intra Blast's formula one step further by adding other ingredients, such as glutamine and betaine, that have been scientifically proven to accelerate recovery, replenish energy stores, improve strength, and keep you hydrated during your workouts. Intra Blast is without question the most advanced intra-workout amino acid product ever created. Take a look at the label and you will find each scoop of Intra Blast contains:

Intra Blast represents a commitment to quality NutraBio made when we opened our doors 20 years ago. This commitment involves using only the highest quality ingredients backed by research, effective clinical doses, and no proprietary blends, fillers, excipients, or other potentially unhealthy or unneeded additives. Although the industry makes it seems like this is a new trend, the fact is NutraBio pioneered these concepts well over a decade ago. For us, it has never been a question of when is it a good time to start being honest. We have always been the innovators, not the imitators.

Without a doubt, Intra Blast is the pinnacle of intra-workout supplementation. There is a reason why it is the #1 rated BCAA/EAA supplement on SupplementReview.com. Intra Blast has everything you need in one comprehensive, open-label, clinically dosed formula and nothing that you don't. We pride ourselves on purity. What you see on the label is exactly what you get. Intra Blast contains no fillers, excipients, proprietary blends, or other potentially unhealthy or unneeded additives.

No other intra workout even comes close to providing the EAA profile and other effective, clinically dosed ingredients found in Intra Blast, which have been proven to fuel performance and enhance recovery. Ask yourself, "Can I expect results if I take shortcuts in my workouts?" If you answered no, then you shouldn't take shortcuts with your intra workout either.

The Science Behind NutraBio Intra Blast

A closer look at the 16 ingredients and doses used to make NutraBio Intra Blast the most complete recovery and performance intra-workout formula on the market.

The essential amino acids leucine, isoleucine, and valine collectively form what is referred to as the branched chain amino acids (BCAAs). These amino acids are essential because they cannot be produced in the body and must be provided though supplementation or diet. BCAAs comprise approximately 30% of the total muscle protein pool and are the primary amino acids oxidized in the muscles during exercise and catabolic stress. For these reasons, athletes supplement with BCAAs for the purpose of increasing muscle mass, reducing muscle damage, blunting fatigue, and increasing energy during exercise.

Hundreds of studies exist on the ergogenic benefits of BCAAs. The majority of them show that BCAAs, whether consumed throughout the day or pre, during, or post-exercise, decrease protein catabolism (breakdown) and support muscle protein synthesis, a physiological process responsible for muscle growth and repair. Furthermore, BCAAs are vitally important to glucose (energy) production, contributing to more than 40% of glucose production during sustained endurance exercises.

A study done in 2009 found that subjects who supplemented with BCAAs while following an 8-week resistance training program had a greater decrease in body fat, an increase in lean mass, and greater strength gains on the bench press and squat compared to the non-BCAA group.

The BCAAs found in NutraBio Intra are in the research-backed ratio of 2:1:1 (leucine: isoleucine:valine) and come from plant sources as opposed to animal sources, such as feathers or hair.

In addition to the BCAAs, there are 6 other essential amino acids (EAAs) needed by the body that must be provided though supplementation or diet. These EAAs are lysine, threonine, histidine, methionine, phenylalanine, and tryptophan. The research involving these EAAs show they contribute to protein synthesis, are important for recovery after intense exercise, and serve many other important physiological functions in the body.

Unfortunately, most companies don't use the full EAA spectrum because they are hard to flavor and very expensive compared to just BCAAs. At NutraBio, we don't shy away from challenges, which is why we chose to take on this difficult formulation task to combine the best of both worlds in creating INTRA BLAST.