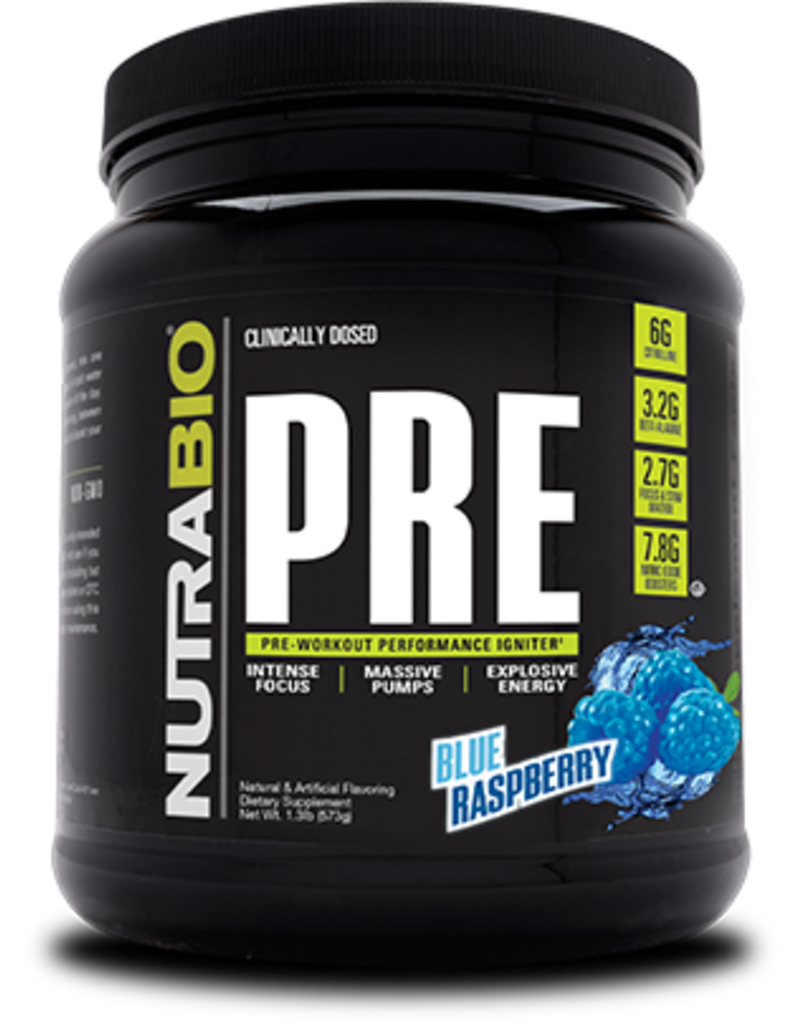 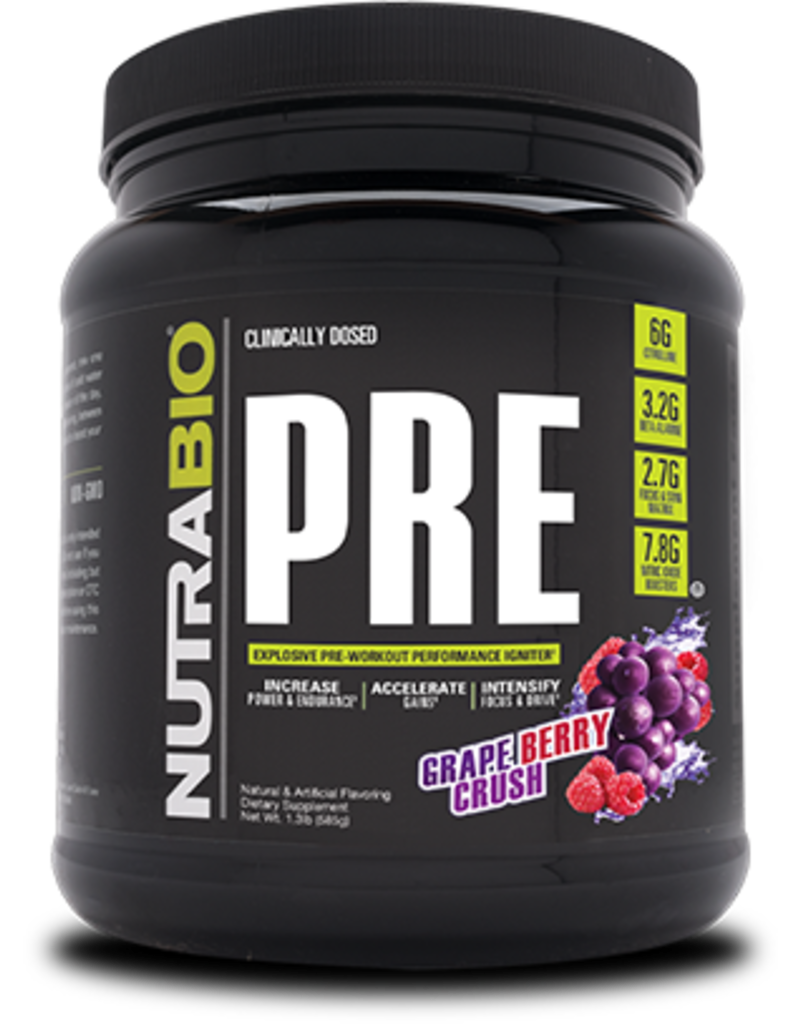 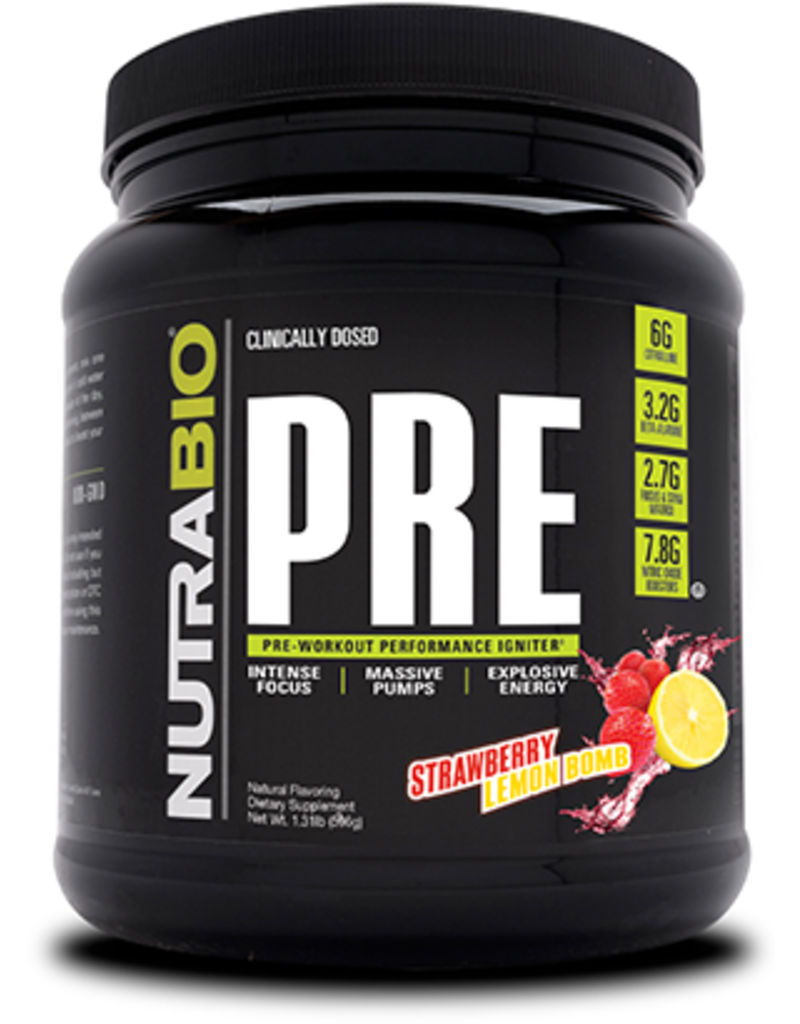 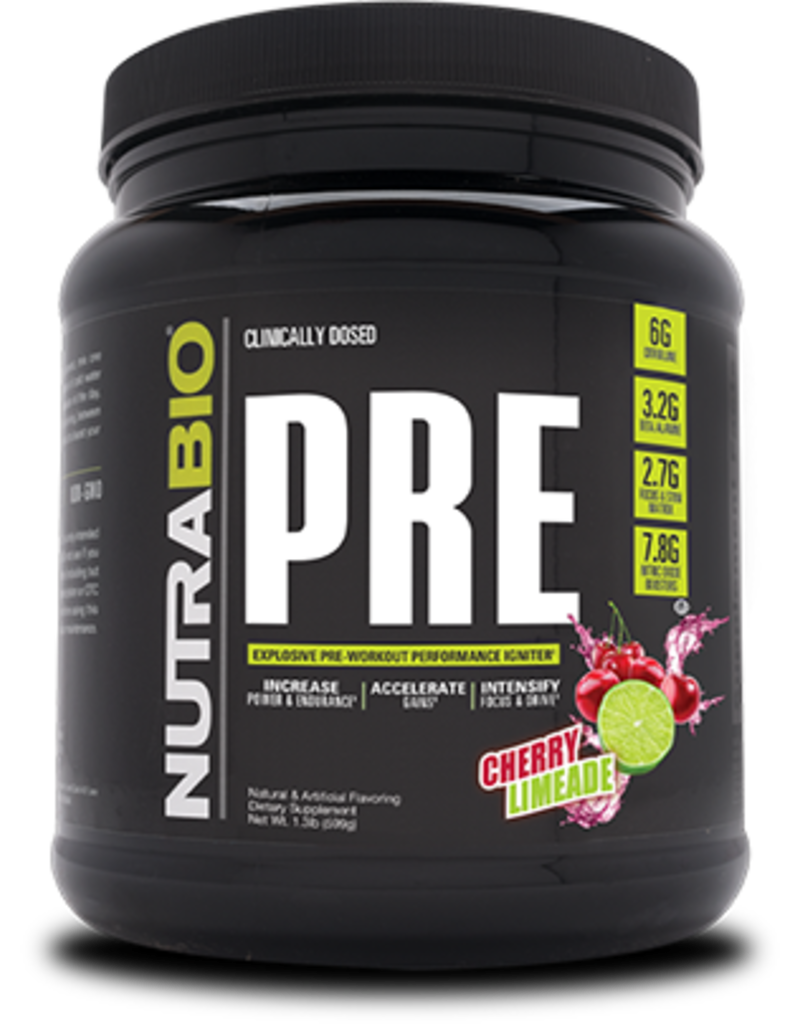 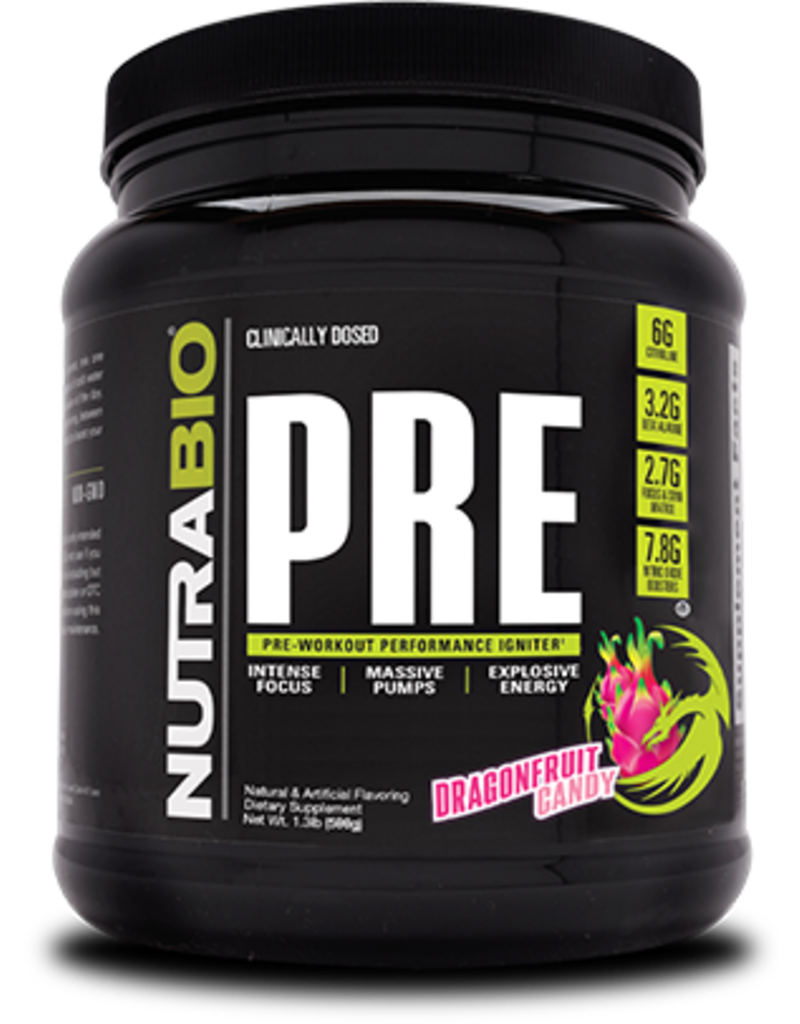 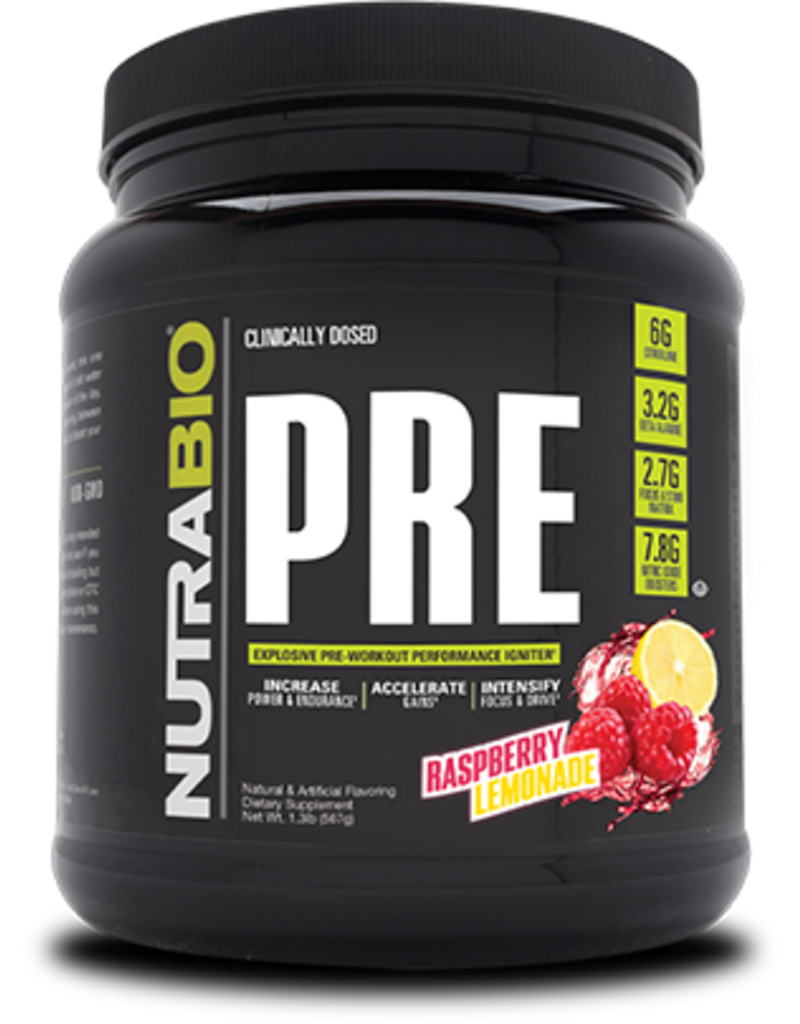 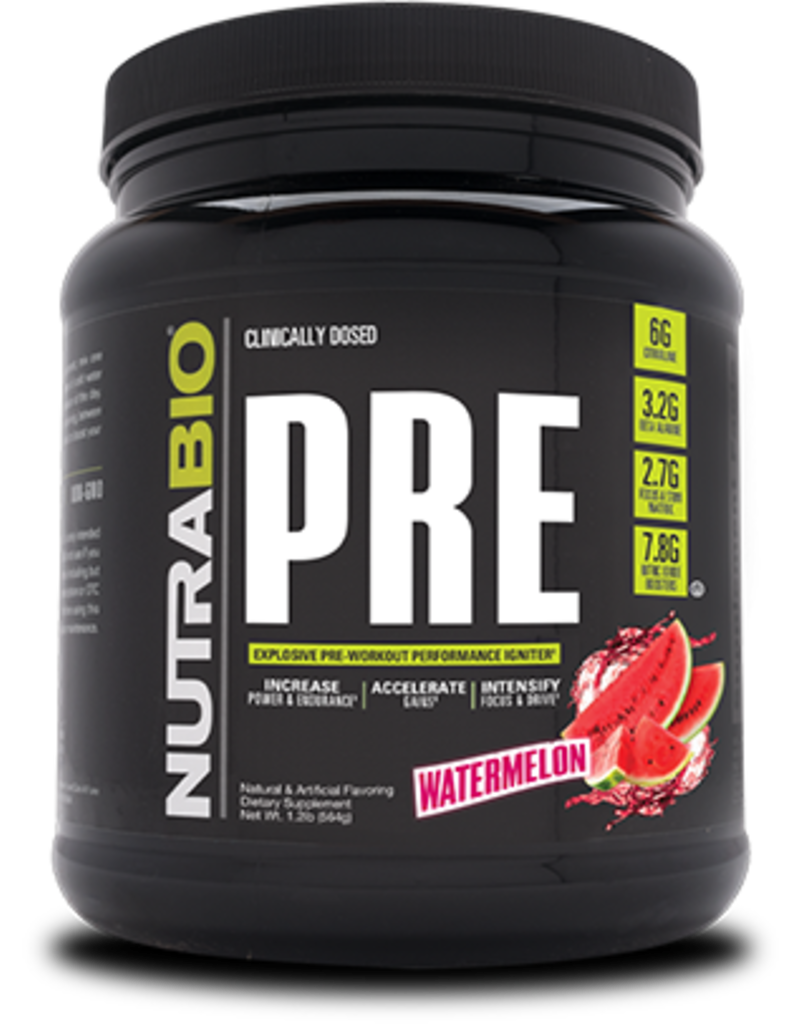 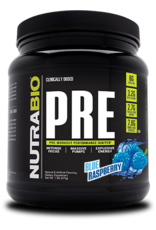 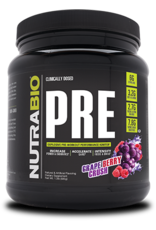 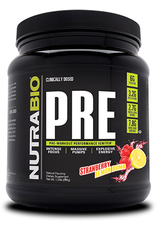 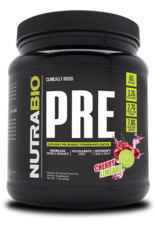 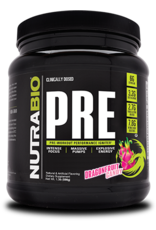 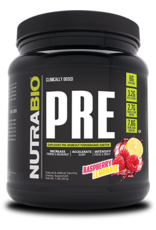 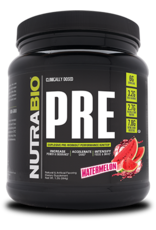 HOW DOES PRE WORK?

WE PUT 16 YEARS INTO YOUR LAST REP

NutraBio® launched the first ever no proprietary blend, fully dosed preworkout back in 2002. For the last 16 years since, we've continuously improved this formula with a singular motivation: your gains. Packed with 27 grams of clinically dosed ingredients, PRE will push you further than ever before. Feel the difference that honest, transparent, fully loaded supplements will make in your training.

NutraBio PRE was formulated with a single goal in mind. To create the absolutely most effective, thorough, and purest pre-workout in existence...period. We can say without a doubt this goal has been accomplished, making PRE the most powerful pre-workout on the market today. PRE is built upon clinically dosed and scientifically backed ingredients proven to maximize workout performance and produce results. Athletes of all levels realize that in order achieve the most effective training session that energy, strength, endurance, and focus are a must. A complete pre-workout supplement should support all of these benefits. The synergistic combination of ingredients found in PRE help prepare your body physiologically and psychologically by amplifying energy, enhancing the mind-muscle connection, and supporting increases in muscular strength, power, and endurance. From top to bottom PRE will help keep you training stronger and longer. Take a deeper look into PRE and you will find:

The Science Behind NutraBio PRE

A closer look at the 18 ingredients and doses used to make NutraBio PRE the premier pre-workout on the market.

Suggested Use: As a dietary supplement, mix 1 heaping scoop of PRE into 12-14 ounces of water and consume 30-45 minutes prior to resistance training. Vary the amount of water to achieve your desired flavor level. PRE is extremely powerful, first time users should begin use with 1/2 scoop or less to assess your tolerance. DO NOT EXCEED 1 SCOOP IN ANY 24 HOUR PERIOD OR USE MORE THAN 5 DAYS IN ANY 7 DAY PERIOD.

WARNING: KEEP OUT OF REACH OF CHILDREN. This product is only intended to be consumed by healthy adults 18 years of age or older. Do not use if you are pregnant, breast feeding, sensitive to caffeine, have known medical conditions (including but not limited to kidney, heart or liver disease) or are taking prescription or OTC medication(s). Consult with your health care practitioner before using this product. Do not use under extreme conditions of heat, CARDIOVASCULAR EXERTION or dehydration. CONTAINS CAFFEINE. Do not use with caffeine or stimulant-containing medications, foods or beverages because too much caffeine may cause nervousness, irritability, sleeplessness and occasionally rapid heartbeat. Discontinue use and consult with your health care professional if you experience any adverse reaction to this product. Do not exceed recommended serving.